Consumers and producers aim to maximize their welfare through economic transactions. Their welfare is determined by choices and preferences. Therefore, understanding social and economic welfare projected by conventional and Islamic economics requires exploring their underlying paradigms and axioms for preference formation, choices, and welfare maximization. Even though conventional economics assumes that preferences are given, it actually considers that they are driven by self-interest. It does not discuss preference formation along determining moral axioms. Rather, it starts from revealed preferences to understand choices of consumers and producers. Thus, preference formation is like a black box. This paper is an attempt to unlock this black box by exploring preference formation along its underlying moral axioms for good life. The paper discusses Islamic moral ideals within the Islamic worldview along the implications of those axioms for consumers, employees, and employers. The paper also explores the gap between those ideals and Muslim reality. It suggests how to empirically test the relationship between moral axioms and ethical behaviors of consumers, employers, and employees. It concludes that internalizing moral axioms would serve as an ethical compass necessary to establish formal and informal institutions for efficient and ethical business organizations.
Advertisement
previous article Exploring the impact of empathy, compassion, and Machiavellianism on consumer ethics in an emerging market
next article Role of retaliation and value orientation in whistleblowing intentions 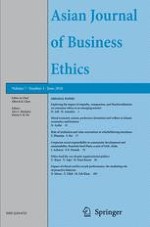 Impact of ethical conflict on job performance: the mediating role of proactive behavior

Exploring the impact of empathy, compassion, and Machiavellianism on consumer ethics in an emerging market

Role of retaliation and value orientation in whistleblowing intentions