No place like home: geography and culture in the dissemination of economic research articles | springerprofessional.de Skip to main content
TOOLBAR 1 2 3 4
SEARCH MENU 1 2 3 4

This paper examines the existence of distance and border effects in the dissemination of knowledge in economics research using a state-of-the-art gravity model for domestic and international citations between 1970 and 2016 for the top 20 source countries. We extend the model with two novel indicators, English proficiency and bilateral internet ties-two key forces in the dissemination of research and knowledge more generally. Our results show that (i) citations decrease with distance, (ii) citations exhibit a significant home bias greater than 1.68, i.e. a more than 50% higher propensity to cite domestic articles, (iii) home bias as well as geographic and cultural distance measures remain significant and at persistent levels over time, (iv) bilaterally high levels of English proficiency are insignificant for citations beyond the measure of general language similarity, (v) countries with closer internet ties have higher shares of bilateral citations, and (vi) geographic proximity is insignificant for citations to econometric articles while cultural linkages are significant.

Title
No place like home: geography and culture in the dissemination of economic research articles
Authors:
Christiane Hellmanzik
Lukas Kuld 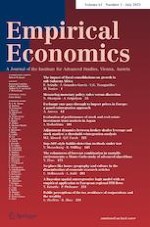 The robustness of forecast combination in unstable environments: a Monte Carlo study of advanced algorithms

Does the choice of balance-measure matter under genetic matching?