Create an alert for European Journal of Wood and Wood Products now and receive an email for each new issue with an overview and direct links to all articles.

The synergic effect between a mild chemical and thermal modification of beech wood (Fagus sylvatica) has been studied. A low concentration of additives based on vinylic-polyglycerol, vinylic-glycerol, and maleic anhydride was impregnated into beech wood, followed by curing under different temperature conditions at 103, 150, 200, and 220 °C. The modified wood was then analyzed for its leaching resistance, dimensional stability, wettability, modulus of elasticity (MOE) and modulus of rupture (MOR) in bending, decay resistance against Trametes versicolor, and termite resistance against Reticulitermes flavipes. Results have disclosed a synergic effect of thermo-chemical wood modification under 200 and 220 °C curing conditions. At these curing temperatures, thermo-chemically modified beech presents improved dimensional stability (> 60%) and better resistance against both Trametes versicolor and Reticulitermes flavipes compared to the control. However, at the same conditions, MOE and MOR values were lowered by approximately 25% and 60%, respectively.
Advertisement
previous article Understanding relationship between the wood quality parameters and susceptibility of Pinus taeda to pine decline
next article Surface mould growth on wood: a comparison of laboratory screening tests and outdoor performance 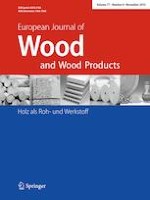 Robust optimization of energy consumption during mechanical processing of wood