Drawing on evolutionary realism as a guiding framework and using relevant theoretical bases at macro- (country-), meso- (industry-), and micro- (firm-) levels, we investigate the relative variance explained by each level on selection (non-economic performance) and retention (decertification) of Benefit Corporations (B-Corps). Based on a sample of 5052 observations of certified B-Corps and 1403 observations of decertified B-Corps, relative to the country and industry differences, firm-level differences explain most of the variance in non-economic performance, especially for workers and community impact areas. Industry-level differences explain small differences in customers and environmental performance while country differences do not explain meaningful performance differences. The results also show a similar pattern in relative effects for decertified B-Corps. Our findings point to the value of disaggregating the relative effects of multilevel factors in further understanding drivers of non-economic performance and the decertification of B-Corps.
Advertisement
previous article Creating Shared Value Through an Inclusive Development Lens: A Case Study of a CSV Strategy in Ghana’s Cocoa Sector
next article How Foreign Institutional Shareholders' Religious Beliefs Affect Corporate Social Performance? 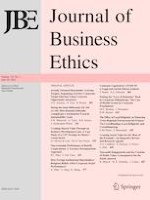 Contracts Capsized by COVID-19: A Legal and Jewish Ethical Analysis