“Not only hard to make but also hard to take:” Team leaders’ reactions to voice | springerprofessional.de Skip to main content
TOOLBAR 1 2 3 4
SEARCH MENU 1 2 3 4

Voicing concerns and suggestions is a central aspect of effective team communication. Engaging in voice has been shown to be an important factor for improving team performance and preventing errors. But voice can only make a beneficial contribution, if it does not fall on deaf ears. Little is known about the interplay of sending and receiving voice in teams. This is problematic because the recipient of voice bears much of the responsibility for the voice message’s outcome and will contribute to the decision if voice is implemented. This study investigates the team leaders’ reactions (i. e., implementation vs. rejection) to three different voice verbalizations (i. e., respectful, explicit, and oblique). We hypothesized that team leaders will implement respectful and explicit voice more likely than oblique voice. Building on the concept of rudeness, we also hypothesized that explicit voice will be perceived as ruder than respectful voice. We tested the hypotheses in 39 teams performing a tower building task. Our results indicate that, compared with oblique voice, both respectful and explicit voice increased the likelihood of voice implementation. Further, explicit voice was perceived as ruder than oblique and marginally ruder than respectful voice. In an exploratory analysis, we also considered the content of voice (i. e., promotive vs. prohibitive). Results revealed that the implementation of voice was related to an interplay between the type of voice verbalization and voice content. Our findings suggest an important link between voice verbalization and voice implementation and contribute to a better understanding of the complex dynamics of team communication. 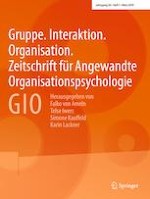