Create an alert for International Journal of Material Forming now and receive an email for each new issue with an overview and direct links to all articles.

Laser shock forming (LSF) technology employs shock waves to form sheet metal into three-dimensional complex parts, and has application potential in manufacturing sheet metal parts. In this paper, the forming of 2024 aluminum alloy sheet with LSF was investigated through numerical and experimental methods. The numerical model was established with the commercial code ABAQUS/Explicit. The formed conical cup was obtained from the simulation, and validated by the experiment. With the verified numerical model, the deformation behaviors, including deformation velocity, sheet thickness variation and strain distribution, were studied. In addition, the influence of different shock wave pressures on the forming precision was also investigated. The experimental and numerical results show that the metal sheet loaded by shock wave can take the shape of the mold, and the non-uniform thickness is distributed in the formed cup. The investigations also display that there exists reverse deformation at the central region of deforming sheet owing to severe collision during LSF. In order to obtain formed part with better quality, an appropriate pressure of applied shock waves is required.
Advertisement 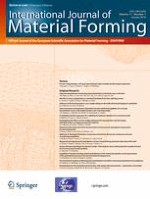