Cementitious Sprayed Fire Resistive Materials (SFRMs) are extensively employed for the fire protection of steel structural members due to their cost-effective fire proofing capabilities. They are susceptible, however, to brittle failure, cracking and spalling when the underlying structural member is subjected to mechanical deformations. A numerical method combining the smeared crack model and the discrete crack concept in a Finite Element mesh splitting scheme, is proposed for the simulation of the damage occurring in the body of the material, leading to a more realistic modeling of the material spalling, which, in conjunction with the loss of interface bond between the SFRM and steel, allows individual pieces of the SFRM coating to detach from steel, leaving it exposed to thermal actions. The proposed method is implemented in a series of numerical models, simulating steel plates bearing 20 mm or 30 mm SFRM coating, which are submitted to constant bending moment, axial tension or axial compression. The numerical results of the failure mechanisms of the SFRM coatings, regarding the failure of the interface bond and the formation of transverse cracks, are in good agreement with the reported observations of the corresponding experimental tests found in the literature. A subsequent numerical thermal analysis of three damaged configurations of the SFRM coated plate, missing 10% to 60.5% of the SFRM coating, submitted to ISO-834 thermal load, indicated that the critical yield stress of the plate due to the temperature rise, is reached 38% to 76% faster in comparison to the undamaged state. The proposed method can be a very effective tool in the assessment and prediction of SFRM damage, as it could be applied on any structural configuration, allowing the further study of the parameters space. 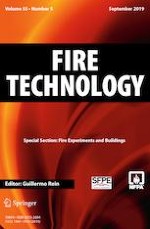