Create an alert for Argumentation now and receive an email for each new issue with an overview and direct links to all articles. 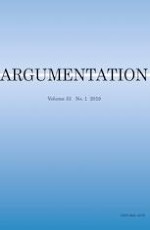 The Thesis of the Effectiveness of Quasi-logical Arguments

Populism and Informal Fallacies: An Analysis of Right-Wing Populist Rhetoric in Election Campaigns