Off-Duty Deviance in the Eye of the Beholder: Implications of Moral Foundations Theory in the Age of Social Media | springerprofessional.de Skip to main content
TOOLBAR 1 2 3 4
SEARCH MENU 1 2 3 4

Drawing from moral foundations theory, we show that differences in sensitivity to distinct moral norms help explain differences in the perceived (un)fairness of punishing employees for off-duty deviance. We used an initial study to validate realistic examples of non-criminal behavior that were perceived as violating a specific moral foundation. Participants in the main study (n = 166) evaluated scenarios in which co-workers were fired for those behaviors, which took place outside of work but were revealed via social media. The extent to which participants valued the norm violated by the co-worker positively predicted perceived fairness of the firing, and negatively predicted expressed intent to take retributive action against the responsible manager. This effect was moderated by the presence of a pre-existing organizational policy regarding off-duty conduct, which uniformly decreased negative reactions to the firing. Because social media now makes the revelation of an employee’s off-duty behavior to a broad audience increasingly likely, our results suggest the importance of developing an approach for responding to employee off-duty deviance while highlighting the relevance of moral pluralism to the study of third-party reactions.

Title
Off-Duty Deviance in the Eye of the Beholder: Implications of Moral Foundations Theory in the Age of Social Media
Authors:
Warren Cook
Kristine M. Kuhn 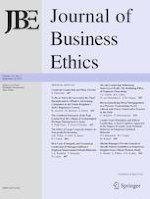 Reconceptualizing Moral Disengagement as a Process: Transcending Overly Liberal and Overly Conservative Practice in the Field

Leader Goal Orientation and Ethical Leadership: A Socio-Cognitive Approach of the Impact of Leader Goal-Oriented Behavior on Employee Unethical Behavior

The Effect of Large Corporate Donors on Non-profit Performance

Ethical, Virtuous, and Charismatic Leadership: An Examination of Differential Relationships with Follower and Leader Outcomes