Create an alert for Natural Computing now and receive an email for each new issue with an overview and direct links to all articles.

There is no doubt that both determining theoretical properties and characterizing the observed behavior of an evolutionary algorithm allow us to understand when to use such an algorithm in solving a class of optimization problems. One of those evolutionary algorithms is the Hybrid Adaptive Evolutionary Algorithm (haea). The general scheme followed by a haea algorithm is to evolve every individual of the population by selecting genetic operators according to a kind of chaotic competition mechanism. This paper proposes and studies, from both theoretical and experimental points of view, the class of hybrid adaptive evolutionary algorithms (called chavela), i.e., the class of evolutionary algorithms that follow such a general scheme. In this way, this paper presents a formal characterization of the chavela class in terms of Markov kernels; establishes convergence properties; proves that (parallel) hill-climbing algorithms belong to the chavela class; develops generational, steady-state, and classic versions; and analyzes the running behavior of chavela on well-known optimization functions.
Advertisement
previous article Productive fitness in diversity-aware evolutionary algorithms
next article A framework for designing of genetic operators automatically based on gene expression programming and differential evolution 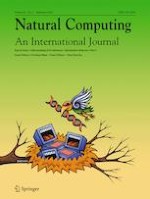 On the use of -evolution strategy as efficient local search mechanism for discrete optimization: a behavioral analysis