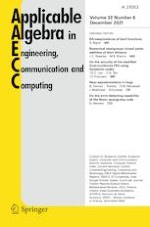 On the error-detecting capability of the linear quasigroup code

Numerical semigroups closed under addition of their divisors

Near approximations in rings