To shed light on the self-stratification mechanism in epoxy–acrylic coatings, 200-, 400-, and 800-micron-thick coatings were applied on glass and aluminum substrates, and their solidification behavior was studied. Some of the applied coats showed self-stratification behavior, with the thermoplastic acrylic copolymer in the top layer. In addition, experiments were performed on epoxy–acrylic solutions without hardeners to evaluate the resulting convective patterns on the solution surface, which exhibited finger-type convection. The final structure of the films had an apparent dependency on the thickness. Thicker films were usually more stratified and had a thicker stratified layer. As these observations could not support diffusion as the primary mechanism of self-stratification, convection experiments were done on epoxy and coatings solutions. The surface patterns on the solutions were studied, and the finger-type convection was observed. Based on these observations, we propose that convection may be the primary movement mechanism rather the diffusion of polymers toward the surface in the self-stratifying coats.
Advertisement
previous article Fabrication of a nonionic self-emulsifiable waterborne epoxy curing agent with high cure properties
next article Ag NPs deposited TiO2 coating material for superhydrophobic, antimicrobial and self-cleaning surface fabrication on fabric 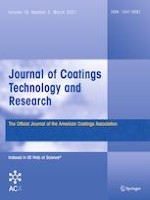