On the Theory of Interdiffusion in Ternary Alloys | springerprofessional.de Skip to main content
SEARCH MENU 1 2 3 4

A mathematical apparatus for studying interdiffusion in three-component systems, using a theoretical approach similar to that previously proposed for describing interdiffusion in binary alloys, has been developed. This approach takes into account the active role of vacancies without assuming their equilibrium distribution; therefore, the equations for component fluxes contain contributions due to the vacancy density gradient. Solutions of a linearized system of interrelated diffusion equations for three components and vacancies are obtained. It has been found that the time dependences of the component density distributions in the diffusion zone, up to terms having a higher order in the expansion in powers of the vacancy concentration, are determined by two coefficients of interdiffusion. These coefficients depend nonlinearly on the component concentrations and the self-diffusion coefficients.
Advertisement
next article On the Theory of Interdiffusion in Ternary Alloys: Concentration Dependences of Kinetics-Related Coefficients

Title
On the Theory of Interdiffusion in Ternary Alloys
Author
A. V. Nazarov 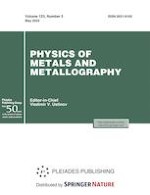 Numerical Study of Nucleation and Solidification Processes in a Modified Melt

Evolution of Phase Composition and Durometric Characteristics in the Refractory Titanium Ti–6.4Al–3.5Zr–2.6Sn–1Nb–0.6Mo–2Si Alloy under Aging