In this work, we study the stability regions of linear multistep or multiderivative multistep methods for initial value problems by using techniques that are straightforward to implement in modern computer algebra systems. In many applications, one is interested in (i) checking whether a given subset of the complex plane (e.g., a sector, disk, or parabola) is included in the stability region of the numerical method, (ii) finding the largest subset of a certain shape contained in the stability region of a given method, or (iii) finding the numerical method in a parametric family of multistep methods whose stability region contains the largest subset of a given shape. First, we describe a simple procedure to exactly calculate the stability angle α in the definition of A(α)-stability by representing the root locus curve of the multistep method as an implicit algebraic curve. As an illustration, we consider two finite families of implicit multistep methods. We exactly compute the stability angles for the k-step BDF methods (3 ≤ k ≤ 6) and discover that the values of tan(α) are surprisingly simple algebraic numbers of degree 2, 2, 4, and 2, respectively. In contrast, the corresponding values of tan(α) for the k-step second-derivative multistep methods of Enright (3 ≤ k ≤ 7) are much more complicated; the smallest algebraic degree here is 22. Next, we determine the exact value of the stability radius in the BDF family for each 3 ≤ k ≤ 6, that is, the radius of the largest disk in the left half of the complex plane, symmetric with respect to the real axis, touching the imaginary axis and lying in the stability region of the corresponding method. These radii turn out to be algebraic numbers of degree 2, 3, 5, and 5, respectively. Finally, we demonstrate how some Schur–Cohn-type theorems of recursive nature and not relying on the root locus curve method can be used to exactly solve some optimization problems within infinite parametric families of multistep methods. As an example, we choose a two-parameter family of implicit-explicit (IMEX) methods: we identify the unique method having the largest stability angle in the family, then we find the unique method in the same family whose stability region contains the largest parabola. 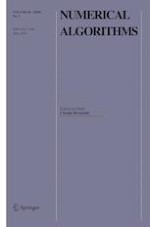 Parallelization, initialization, and boundary treatments for the diamond scheme

Global uniqueness and solvability of tensor complementarity problems for -tensors