This study sought to gather information through a survey of how newcomer parents’ beliefs about technology usage and how they engage with technology as they support their children with twenty-first century literacies. Parent respondents (N = 70) were drawn from two publicly funded schools in the Niagara Region, Ontario, Canada, where the population tends to be immigrant, visible minority, with post-secondary education, but unemployed and low income. Descriptive statistics quantified daily technology activities as being communication-oriented with the majority of parents holding distinct beliefs about the amount and type of their children’s technology usage. Chi-square tests indicated significant associations for demographic characteristics such as the gender, age, education, first language, and ethnicity of the parents as determinants of their beliefs about their children’s technology usage (e.g., social media, mobile phones, television). As well, levels of access and use varied in terms of the number of new technologies and the types of literacy practices that families engage in. Immigrant parents might hold misconceptions about twenty-first century literacies, therefore there should be an attempt to assist them to provide responsive twenty-first century literacy and technology support for their children. 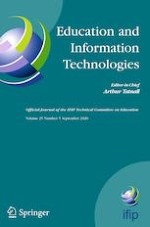 Virtual tutor and pupil interaction: A study of empathic feedback as extrinsic motivation for learning