Path-disruption games, recently introduced by Bachrach and Porat, are coalitional games played on graphs where one or multiple adversaries each seeks to reach a given target vertex from a given source vertex, while a coalition of agents seeks to prevent that from happening by blocking every path from the source to the target for each adversary. These coalitional games model, for instance, security issues in computer networks. Inspired by bribery in voting, we introduce the notion of bribery for path-disruption games. We analyze the question of how hard it is to decide whether the adversaries can bribe some of the agents such that no coalition will form that blocks all paths for them. We show that this problem is NP-complete for a single adversary and complete for \({\Sigma }^{\mathrm {P}}_{2} = \text {NP}^{\text {NP}}\), the second level of the polynomial hierarchy, for the case of multiple adversaries. We also expand the model by allowing uncertainty about the targets: In probabilistic path-disruption games, we assign to each vertex the probability that an adversary wants to reach it, and we study the complexity of problems related to common solution concepts (such as the core and the ε-core) and other properties of such games. 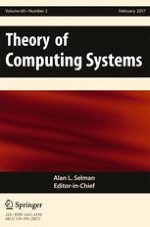 The Behavior of Clique-Width under Graph Operations and Graph Transformations

A Difference in Complexity Between Recursion and Tail Recursion