In this study, we examine the impact of the founders’ level of international entrepreneurial orientation (IEO) on the export degree and scope of early internationalizing firms (EIFs). Since the emergence of international entrepreneurship (IE) as a research field, theoretical knowledge on the performance determinants of EIFs remains limited. Those studies that have examined the performance determinants of EIFs predominantly focused on subjective performance measures and thus fall short in capturing the real performance dynamics. In addition, the effect of IEO on EIFs remains relatively unexamined in the context of less-developed countries (LDCs). We adopted a quantitative approach to uncover the impact of founders’ level of IEO on the objective international performance of EIFs. Our study was survey-based, and we drew data from the Bangladeshi apparel industry. The proposed hypotheses were tested using an ordered logistic regression modeling technique. We found that the export degree and scope of EIFs are influenced by their founders’ level of IEO. Our findings also revealed a positive effect of two dimensions of IEO, i.e., proactivity and risk-taking propensity on the export degree and scope of EIFs. The implications of our findings for theory, policy, and practice are considered. 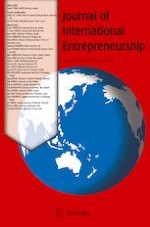 The competitive context of strategic orientation and strategy formulation in entrepreneurial and strategic internationalization: Multiple-player and multiple-period games

Emergence of an entrepreneurial opportunity: A case within a Finnish telecommunication international new venture

Organisational barriers to nascent born-global growth: Learning from the inside