Combustible facade systems used in modern buildings envelops have received much attention in recent times due to their involvement in propagation of accidental fires in such buildings. This study presents findings from four full-scale real fire experiments performed on a three-story structure (each room being of plan dimensions \(10'\times 20'\) and story height \(10'\)) with combustible facade systems involving firestops, aluminum composite panels and glass. Two experiments simulated external fire-spread mechanism through the leap-frog effect (one with external fire source and one with internal fire source). The other two experiments were designed to study internal fire spread mechanism due to failure of firestops, a crucial design component of facade systems which is overlooked by most standardized facade fire tests. The experiments indicated that a facade fire can reach from one story to the next in about 3 min and hence, can severely limit the response and egress time for higher floors of a building. Further, the experiments showed that the facade system was exposed to heat flux levels in excess of \(100\,\mathrm{kW}/\mathrm{m}^{2}\) with maximum temperatures reaching \(1000^{\circ }\mathrm{C}\). The existing testing standards consider lower incident flux levels and the gas burners used in most existing test methods can reach maximum temperatures of around \(700^{\circ }\mathrm{C}\) only. These findings indicate a significant gap between current testing standards and real fire performance of facade systems. A study of failure mechanisms of individual components during the experiments showed the need of considering the system in its entirety rather than performing component level testing. The importance of firestops also became evident through these experiments. Properly designed firestop system ensured good compartmentation and prevented spread of fire to the upper floors, whereas improper firestop allowed fire to spread easily to upper floors. It is expected that the insights presented in this study will be useful to improve facade designs as well as to develop more robust testing procedures. 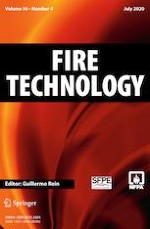