insite
CONTENT
PATENTSEARCH
Activate to find patents in this article.
powered by
Search for Patents
download
DOWNLOAD
share
SHARE
print
PRINT
insite
SEARCH
Black high-gloss surfaces in piano lacquer look are elegant and are considered timeless. For designers, they are one of the most popular elements for the styling of vehicle interiors. However, these surfaces also have disadvantages for the end customer. For example, the surface often shows scratches of various kinds after a relatively short time. Joysonquin has found a solution to these problems in combining the positive properties of glass and plastic.
High-gloss surfaces in motor vehicles scratch easily and react very sensitively to various substances such as sunscreen. The aging process also causes problems for the surfaces. In addition, the high-gloss surfaces - frequently installed in premium vehicles - are very difficult to clean. The Polymethyl Methacrylate (PMMA) technology developed by Joysonquin is a robust and cost-effective trim part technology. Increasing customer demands on the interior in terms of chemical-mechanical resistance made it necessary to refine PMMA, Figure 1.
×

From plastic solution to glass finishing

The idea of relying on glass or glass-like technologies results from the typical properties of glass. Glass is extremely scratch-resistant and very impervious to a wide range of chemicals. The challenge of combining PMMA with a glass finishing was to realize even three-dimensional parts with manageable effort. The answer was glass finishing from the liquid phase. The further challenge was to match the extremely different mechanical properties of the PMMA and the glass surface to prevent a brittle surface on a soft substrate. This problem was solved with an adapted formulation of the liquid glass mixture. An additional task was the realization of an optically sophisticated, homogeneous glass surface. In addition, the liquid glass preceding stage could be applied loss-free, that means without overspray, using a digital painting technique.

The cross-linking mechanism of the liquid glass precursor requires process engineering precautions to comply with the various ambient conditions customary for painting, among other things, the paint material supply at the pressure vessel is pressurized with an inert gas.
To ensure homogeneous surface wetting with the liquid glass precursor, an upstream cleaning process is required for the surface substrate to be coated. The upstream cleaning process ensures a homogeneous, closed glass surface without surface defects and wetting problems. The sustainability of the overall process is supplemented by the use of a recycled cleaning medium. The application of the glass surface from the liquid phase can be done both conventionally via a spray process, especially a low-pressure spray process, as well as via an efficient and sustainable digital painting technology, Figure 2. The special features of this digital application process are minimal material consumption (zero overspray), no paint preparation or paint disposal processes. The process is therefore extremely sustainable in terms of energy and ecology. The technological peculiarity of the digital application technology is that around 1000 nozzles in an application head can be individually controlled, thus guaranteeing the highest level of precision in the application.
×
The trim parts are constructed in the order Polycarbonate (PC)/Acrylonitrile-Butadiene-Styrene (ABS) - PMMA - glass. The PC/ABS serves as the backing functional carrier component. The PC/ ABS composite with PMMA is produced in a one-step injection molding process. Subsequently, the glass coating is applied in a layer thickness of less than 10 μm, from the highly reactive liquid glass preceding stage. The resulting glass surface is a very dense crystalline silicon suboxide (SiOx) layer specially adapted to the mechanical properties of the PMMA.
Advertisement
The glass finishing produces a visually increased color depth without the need to color the liquid glass preceding stage. The high surface smoothness ensures a pleasant feel. This excellent adhesion is reflected in the climatic results, according to which climatic effects do not affect adhesion. Due to the chemical reaction with the substrate, the effect of media is also not detrimental. In the following, the surface properties will be described in more detail.

The glass surface is absolutely resistant to the typical OEM test media, Table 1, such as the substances listed in the Daimler delivery specification DBL 7384 [1]. In the tests standardized according to this rule, the care agents were allowed to act on the glass surface with a Crockmeter and a felt as head with arround 30 double strokes and there was absolutely no change in the glass surface after 24 h.
Table 1
Overview of the property profile of selected tests on the glass surface (© Joysonquin)
The glass surface is also highly resistant to the effects of sunscreen. This was determined according to BMW standard AA-0053 [2], for example. Exposure to sunscreen is absolutely unproblematic and also shows no effect on the adhesion of the glass layer or on scratch resistance. In this test, the surface was coated with sunscreen and then stored at 60 °C for 24 h. After 24 h regeneration, the optical change, adhesion and scratch resistance after exposure were considered. As described earlier, adhesion remained excellent and scratch resistance still at 15 N. Exposure to various solvents, such as isopropanol is also absolutely unproblematic since this substance can barely wet the surface to act.
To determine the scratch resistance, for example, the Erichsen scratch test was also used in accordance with BMW standard GS 97034-9. Here, a steel tip with a diameter of 0.75 mm penetrates the surface at a load that increases constantly from 1 to 20 N. The load at which penetration or even abrading of the coating can be seen is determined. In direct comparison with PMMA, the glass surface produces a scratch resistance that is 1.5 times higher in the Erichsen test (PMMA: 10-12 N; glass/PMMA: 25-30 N) in interaction with PMMA.
In terms of abrasion resistance, there is a significantly measurable increase in resistance due to the glass coating on the PMMA. This is most evident in the Crockmeter test according to the BMW standard GS 97034-10. In this test, a friction pin is pushed back and forth on a linear drive with a defined force. An attempt is made to specifically damage the surface in order to assess susceptibility to scratches and abrasion.
While PMMA as such loses 60 % of its original gloss level in the Crockmeter test after just one double stroke, the glass coating still achieves gloss level changes of less than 3 % even at 100 double strokes.
In the abrasion test according to BMW standard GS 97034-1, hardly any changes were noticed on the surface after around 20,000 strokes. The glass coating behaved even more strongly in the interaction of abrasion with a hand-welding solution in the standard according to DBL 7384. Here, there was still no change at all to the surface after 80,000 strokes. Particularly in interaction with applied media, the surface is resistant to such effects, since the surface roughness is very low and the anti-adhesion effect hardly permits wetting. The abrasion-generating object slides away from the surface, and damage cannot even occur, Figure 3.
×

After climate tests such as a climate change test according to the Daimler DBL 7384 standard or a BMW AA-0026 aging test, the properties such as scratch resistance and adhesion still remain. The Erichsen test showed continued excellent adhesion and scratch resistance of at least 15 N. Other climatic tests such as a condensation constant climate test according to the BMW standard AA-0213 and aging tests according to the BMW standard AA-0026 are also absolutely unproblematic for the glass surface on PMMA. In the condensation water constant climate test, the reaction of the surface to high humidity is examined. There is no evidence of any adverse effects. The aging test is comparable to heat aging. Again, the influence of temperature on the adhesion of the glass surface is examined: Again, no difficulty is shown for the glass surface.

The anti-stick and easy-to-clean properties of the glass coating are particularly outstanding. The glass coating results from a highly reactive liquid glass preceding stage which is applied to the PMMA. The finished glass surface has a very high crosslink density consisting of a SiOx network with an extremely low surface roughness. Chemically, SiOx networks hardly form any physical interactions with other substances (compare silicone). The crosslinking, which corresponds to a hydrolysis-condensation reaction, produces a crystalline glass layer that offers no points of attachment for other substances. A very low surface energy and low roughness produces an anti-stick effect and easy-to-clean property. With this anti-stick effect, a strong resistance to media of various kinds is achieved, be it sunscreen, care products or other chemicals. This anti-stick effect also allows easy cleaning of contaminants.
A dry cloth is enough to achieve an excellent cleaning effect. Fingerprints in particular can be removed very easily even when dry, without the risk of scratching the surface.
By means of contact angle measurements, the anti-adhesion effect can be shown most precisely. Deionized water shows a contact angle of 100° on the finished glass surface, which corresponds to almost superhydrophobic behavior, that means a strong water-repellent effect. Liquids such as isopropanol (a component of alcoholic cleaners) also exhibit a high contact angle. This makes wetting more difficult and allows cleaners to bead up better, thus making it easier to clean the surface. This phenomenon is best described by Figure 4, where isopropanol was applied to the pure PMMA and to the glassy surface. It is easy to see how the isopropanol contracts and has hardly any possibility of wetting.
×
Fingerprints are much easier to remove from the glass surface compared with the predecessor PMMA technology; this was already evident in the dry test after just a few passes. With PMMA technology, the grease bonded with the plastic over the long term and led to scratching during cleaning due to the high sensitivity of PMMA. The glass surface minimizes this risk.

Glass finishing on PMMA has made it possible to realize a scratch- and abrasion-resistant glass surface for black high-gloss interiors that meets the high demands of premium OEMs and end customers. Increased scratch and abrasion resistance, enormous resistance and stability to a wide range of media and climatic influences, are the hallmarks of this solution. The OEMs and end customers benefit from the appearance and smoothness of the surface which corresponds to the value of a premium vehicle as well as easy cleaning of the unlimited 3-D-capable glass surfaces. 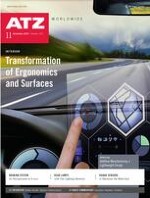