Engaging Polanyi’s embeddedness–disembeddedness framework, this study explored the work experiences of Bhil children employed in Indian Bt cottonseed GPNs. The innovative visual technique of drawings followed by interviews was used. Migrant children, working under debt bondage, underwent greater exploitation and perennial and severe depersonalized bullying, indicative of commodification of labour and disembeddedness. In contrast, children working in their home villages were not under debt bondage and underwent less exploitation and occasional and mild depersonalized bullying, indicative of how civil society organizations, along with the state, attempt to re-embed economic activities in the social context. Polanyi’s double movement was evident. ‘Place’ emerged as the pivotal factor determining children’s experiences. A ‘protective alliance’ of community controls and social power, associated with in-group affiliations and cohesive ties, stemming from a common village and tribal identity, aided children working at home for Bhil farmers. ‘Asymmetric intergroup inequality’ due to pronounced social identity and class differences, coupled with locational constraints and developmental disadvantage, made migrant children vulnerable targets. Social embeddedness influences how child workers are treated because it forces employers to be ethical and not engage in bullying. However, by shifting production to children’s home villages, there is an attempt to obscure the difference between child labour and child work. Thus, the seeds of disembeddedness are sown through the very act of re-embeddeding, potentially hampering future interventions.
Advertisement
previous article Legitimacy and Cosmopolitanism: Online Public Debates on (Corporate) Responsibility
next article Should You Buy Local? 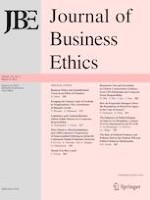 Escaping the Fantasy Land of Freedom in Organizations: The Contribution of Hannah Arendt