Create an alert for Journal of Automated Reasoning now and receive an email for each new issue with an overview and direct links to all articles.

Algebraic datatypes, and among them lists and trees, have attracted a lot of interest in automated reasoning and Satisfiability Modulo Theories (SMT). Since its latest stable version, the SMT-LIB standard defines a theory of algebraic datatypes, which is currently supported by several mainstream SMT solvers. In this paper, we study this particular theory of datatypes and prove that it is strongly polite, showing how it can be combined with other arbitrary disjoint theories using polite combination. The combination method uses a new, simple, and natural notion of additivity that enables deducing strong politeness from (weak) politeness.
Advertisement
previous article Deciding the Word Problem for Ground and Strongly Shallow Identities w.r.t. Extensional Symbols
next article Using Model Theory to Find Decidable and Tractable Description Logics with Concrete Domains 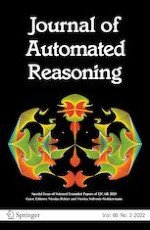 The Resolution of Keller’s Conjecture