One of the essential engineering challenges lies in the supply of highly durable, efficient components for applications such as transportation and structural engineering. Lightweight components will continue to play a vital role in meeting the requirements of sustainability and resource efficiency, while at the same time complying with the highest demands in terms of the reliability of these components and systems in the foreseeable future [ 1].
Forming processes are of utmost importance for the production of lightweight components made of metallic materials. This outstanding position on the one hand is due to the high productivity and robustness of the processes as well as the excellent and reliable quality level of the formed parts. On the other hand, the efficient material utilization in forming processes results in low embodied energy in the product [ 2]. Additionally, forming processes not only set the geometric shape and surface, but also the mechanical properties of the metallic component. A positive influence on the mechanical properties results in particular from work hardening and microstructure evolution e.g. via phase transformations or grain refinement due to recrystallization. At the same time, a certain degree of ductile material damage inevitably occurs during forming and mostly has a negative effect on the mechanical properties.
Advertisement
Despite of that damage has not yet been taken into account in the design of products manufactured by metal forming, as these currently only have to be “failure-free”, but not “damage-free”. A plentitude of definitions for damage were published in the past either focusing on the difference between relating it to a specific area or volume [ 3] or on the determination in measurement [ 4]. Some of these are contradictive, especially when they stem from different disciplines. In the context of damage controlled forming processes the authors suggest the following definition: “Ductile damage causes the degradation of physical properties, in particular of mechanical properties, due to microstructural defects. These defects are characterized by the formation of new surfaces. In structural materials voids and micro cracks initiate mostly by decohesion at interfaces such as grain boundaries and inclusions or due to brittle fracture of hard phases. The evolution of voids and micro cracks then causes damage under thermo-mechanical loading.” The involved scales, the underlying mechanisms and the course of ductile damage are shown in Fig.  1.
×
This complex multi-scalar, multi-mechanism nature of damage makes it difficult to consider in manufacturing. However, if the damage level in a metal formed component is not known, there are two direct consequences:
An increased awareness is particularly relevant for modern high-performance steels. Due to their complex microstructure, they exhibit ductile damage mechanisms, some of which are not fully understood. Void nucleation in single phase metals occurs by decohesion of inclusions from the surrounding matrix or by inclusion cracking [ 5]. The second mechanism is the growth of voids, which is related to large values of triaxiality, i.e. the hydrostatic stress divided by the equivalent stress [ 6]. These stages are then followed by void coalescence, which describes the linkage of separate voids as observable today in computer-tomography [ 7]. In dual or multi-phase materials such as dual phase steels, these mechanisms compete [ 8] and occur already at very small plastic deformations.
Thus, to exploit fully the potential of such modern material concepts, a paradigm shift in dealing with damage towards damage-controlled forming processes is imperative.
Advertisement

The aim of damage-controlled forming processes is to understand and predict material damage during forming and to amend it specifically with regard to component performance. For this purpose, methods for the model-based description of the damage evolution taking into account the governing metal-physical mechanisms as well as technologies for the detection of damage and technical utilization require continuous development.
The basis and starting point is the observation that different process routes for forming a component from a given semi-finished product lead to the same final geometries, but different properties and damage. Thus, it is in principle possible to influence the damage evolution throughout the entire forming process chain—from the semi-finished product to the finished component—via the selection and design of the forming processes and their parameters. If not only the nominal material properties are used in component design, but the damage caused by the forming process is taken into account in the same way as other production-induced properties (cf. Fig.  2), this leads to the paradigm shift mentioned above that effects both the design of the forming processes and the finished components.
×
The production process design based on maximum formability, which is oriented only towards the failure-free manufacturing of the component, is then superseded by a damage-based process design, which instead considers the usability of the component in terms of the achievement of maximum possible performance. The damage-controlled design of the forming process chain ensures that not only the desired microstructure and the macroscopic properties are set as required, but also that the accumulated damage in the product is minimized. As a result, the component is not only macroscopically failure-free and meets the conventional quality requirements, but also holds superior mechanical properties and a higher load carrying capability.
In order to enable the widespread consideration of damage in metal forming process chains, the following fundamental questions must be addressed that have so far only been touched upon to a limited extent in current research:
The comprehensive consideration of damage in metal forming process chains is pursued within the ongoing collaborative research center TRR188 on “Damage Controlled Forming Processes” by researchers of different disciplines at the TU Dortmund University, the RWTH Aachen University, the Max-Planck-Institut für Eisenforschung and the Brandenburg University of Technology. At least one of the aforementioned research questions is at the center of each of the following articles in this special issue—based on contributions from the TRR188 and from researchers around the world. This issue as a whole thus provides an insight into the current state of research on damage controlled forming processes.

The authors gratefully acknowledge the funding by the Deutsche Forschungsgemeinschaft (DFG, German Research Foundation) within the TRR 188—Project number 278868966 on “Damage Controlled Forming Processes”. Open Access funding provided by Projekt DEAL.
Open AccessThis article is licensed under a Creative Commons Attribution 4.0 International License, which permits use, sharing, adaptation, distribution and reproduction in any medium or format, as long as you give appropriate credit to the original author(s) and the source, provide a link to the Creative Commons licence, and indicate if changes were made. The images or other third party material in this article are included in the article's Creative Commons licence, unless indicated otherwise in a credit line to the material. If material is not included in the article's Creative Commons licence and your intended use is not permitted by statutory regulation or exceeds the permitted use, you will need to obtain permission directly from the copyright holder. To view a copy of this licence, visit http://​creativecommons.​org/​licenses/​by/​4.​0/​. 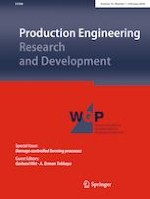 Modelling of void healing in hot rolling due to recrystallization