Preparation of Nanofluid of Lanthanum Borate Nanosheets and Investigation of Its Tribological Properties and Tribomechanisms in Different Base Oils | springerprofessional.de Skip to main content
SEARCH Menu 1 2 3 4

Create an alert for Tribology Letters now and receive an email for each new issue with an overview and direct links to all articles.

Oleic acid-modified lanthanum borate nanosheets (OA-LBNs) were prepared by simple surface modification technology combined with precipitation method. The structure of the as-prepared light yellow transparent nanofluid of OA-LBNs was analyzed by Fourier transform infrared spectroscopy and transmission electron microscopy, and its thermal stability was evaluated by thermogravimetric analysis. Moreover, the tribological properties of OA-LBNs nanofluid as the lubricant additive in diisooctylsebacate (DIOS), poly-α-olefin (PAO4), and rapeseed oil (RO) were evaluated with a four-ball friction and wear tester, and its tribomechanisms in the three kinds of base oils were also discussed. The results show that OA-LBNs nanofluid exhibits good antiwear ability in the three kinds of base oils; in particularly, OA-LBNs nanofluid added in PAO4 shows the best antiwear ability. The tribological properties of the OA-LBNs nanofluid as the lubricant additive are dependent on the nature of the base oils. Namely, the polarity of the base oil influences the adsorption of the OA-LBNs nanofluid on the rubbed steel surface, thereby affecting the composition of the tribofilm formed on the rubbed steel surface and resulting in changes in tribological properties.
Advertisement 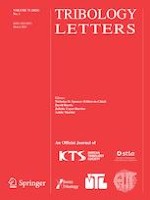