The present study was initiated to investigate levels and predictors of wellbeing among inhabitants of intentional communities (ICs). An anonymous, Internet-based questionnaire was distributed to US and Canadian ICs. Responses were obtained from 913 members. Wellbeing was measured by the widely used satisfaction with life scale (SWLS). Hierarchical linear regression analyses were run to test the predictive validity of Social support, Identity fusion, Meaning in life, Community satisfaction and Life change, and Religious activity above and beyond demographic variables and personality traits. Mean scores on the SWLS were estimated to 5.27 and 5.47 (1–7 scale) for men and women, respectively. The full model explained 41.4% of the variance for men and 38.2% for women. Personality explained 13.4 (men) and 14.4% (women) of the variation, while demographic variables only had a minor impact. Overall, presence of Meaning in life and Social support were the most important predictors. The IC inhabitants reported wellbeing on par with the highest scores previously published. The findings support the contention that sustainability, in the form of a communal lifestyle of low ecological footprint, may be promoted without forfeiting wellbeing. 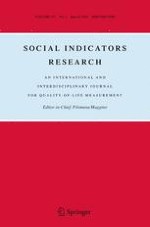 Family Functioning and Socioeconomic Status in South African Families: A Test of the Social Causation Hypothesis

Spatial Variation in the Poverty Gap Between People With and Without Disabilities: Evidence from Vietnam

Measuring Women’s Empowerment: A Critical Review of Current Practices and Recommendations for Researchers