Water stress due to poor water quality has been becoming severe in many places across the world. Comprehensive water utility and water scarcity assessments require information integrating both water quantity and quality. While massive attentions have been paid to water quantity scarcity evaluations, little effort has been made to assess inter-annual variations of regional water scarcity resulting from both water quantity and quality. The study, taking water-abundant while stressed Jiangsu province (JSP) in eastern China as the study area, investigated (i) the development in green, blue and grey water footprint (WFs) for crop production, over 1986–2016, (ii) the inter-annual evolutions in blue and grey WFs for industry and households over 2010–2016 and (iii) the associated inter- and intra-annual variations in water scarcities resulting from water quantity and quality. Results showed that the annual total WF of crop production in JSP increased by 18% between 1986 and 2016. Grey WF accounted for 77% of the total WF at an annual average level. Crop production occupied 61% and household accounted for 34% in the total grey WF related to N. The monthly blue water scarcity levels in JSP increased by 4 (October 2016) – 62 (February 2012) folders when water quality effects were taken into account. The wetter the year, the lower the blue water scarcity of water quality and quantity. As a sensitive and crucial region with both severe water pollution scarcity and the role of water source region in the huge South-to-North water transfer project, it is of great necessity to enhance the water pollution management and increase information transparency among water authorities and consumers. 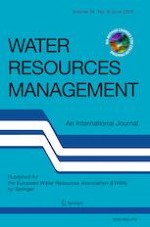 The Welfare Implications of Bankruptcy Allocation of the Colorado River Water: The Case of the Salton Sea Region