Quantum Inspired Evolutionary Algorithms (QIEAs) are Evolutionary Algorithms which use concepts and principles of quantum computing. The 0/1 knapsack problem (KP) is a well known combinatorial optimization problem that has been typically used to validate the performance of QIEAs. However, there are some variants of KPs called difficult knapsack problems (DKPs) that are known to be more difficult to solve. QIEAs have not yet been fully explored for solving these. In this work, an improved QIEA, called QIEA-PSA is presented. A novel method to initialize the qubit individuals based on heuristic information for the KP instance and a method for size reduction for each new generation are introduced in the presented QIEA-PSA. Experiments are carried out for several types of DKPs that are much larger in size than those attempted hitherto. QIEA-PSA provides much better solutions than QIEA with much lesser computation times. Even a serial implementation of QIEA-PSA competes favorably on the same problem instances with a parallel implementation of an exact algorithm given recently in literature. A comparison is made which shows QIEA-PSA outperforms a recently applied population based search technique to solve benchmark KP instances. The ideas used for developing QIEA-PSA are general and may be utilized with advantage on other problems. 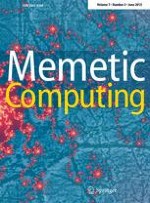