Create an alert for Journal of Happiness Studies now and receive an email for each new issue with an overview and direct links to all articles. 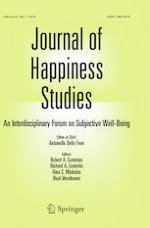 The Good, the Bad, and the Ordinary: The Day-of-the-Week Effect on Mood Across the Globe

(E)Quality of Life: A Cross-National Analysis of the Effect of Gender Equality on Life Satisfaction

Global, Relational, and Sexual Motivation: A Test of Hierarchical Versus Heterarchical Effects on Well-Being

Discrepancy Regarding Self, Family, and Country and Well-Being: The Critical Role of Self and Cultural Orientation