The variation in refractive index of the atmosphere causes wavefront aberration of optical signal propagating through the random atmosphere. This leads to various effects such as beam spreading, wandering and scintillation (intensity fluctuation) which are responsible for severe signal degrading of the free space optical (FSO) communication system. Incorporation of adaptive optics (AO) technique mitigates the effect of wavefront aberration distortions and reducing the signal fading. Non-conventional adaptive optics is demonstrated using complex search algorithms which requires large number of iterations and computations to obtain the optimum value of the results. In this paper, Convolutional Neural Networks (CNN)-based novel wavefront aberration compensation technique is proposed. The aim of this work is to experience and validate the CNN-based wavefront sensorless adaptive optics (WFSLess AO) technique for 70 m realtime FSOC. The major issues such as time-consuming iterative processes and latency in complex search algorithms and similar algorithms are greatly avoided by detecting the wavefront distortion from the direct images of the optical beam used in the experimentation. LeNet CNN architecture is realized to compensate wavefront distortion for the acquired data sample under different weather condition. Experiments are conducted on Xilinx Spartan-6 FPGA using high level synthesis. The performance of the proposed scheme is compared to existing approaches (T Weyrauch and MA Verontsov in Appl. Opt. 44:6388–6401, 2005; MJ Booth in Opt. Express 14:1339–1352, 2006; H Linhai and R Changhui in Opt. Express 19:371–379, 2011) and it shows an effective Strehl Ratio, Root Mean Square and reduced computation time thereby resolves the latency issue while maintaining accuracy which is a serious problem in AO systems.
Advertisement 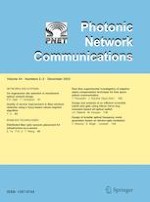