The online version of this article (https://​doi.​org/​10.​1007/​s11109-018-9468-2) contains supplementary material, which is available to authorized users.
An earlier version of this manuscript was presented at the 3rd New Research on Gender in Political Psychology Conference in New Orleans, LA, October 22–24, 2017. Thanks to the panelists for their helpful feedback.

Much of the gender gap literature focuses on women’s greater average liberalism relative to men. This approach masks considerable heterogeneity in political identity and behavior among women based on race, class, and other key socio-demographic characteristics. In the 2016 Presidential contest, political divisions among women were evident in exit polling, which demonstrated that a majority of white women voted for Donald Trump. This was not an anomaly but reflects a more long-standing distinction between white women and women of other racial and ethnic identifications. In this paper, we draw on intersectionality and system justification theory as frameworks for exploring the distinctive political behavior of white women. Using data from the 2012 and 2016 American National Election Studies, we evaluate the factors that attracted white women voters to the GOP and kept them in the fold in spite of expectations that sexism in the campaign would drive women away from the party during the 2016 Presidential race. Our analyses show that many white women endorse sexist beliefs, and that these beliefs were strong determinants of their vote choice in 2016, more so than in 2012. Our findings also point to important divisions among white women based on educational attainment and household income in terms of both the endorsement of sexism and vote choice. These results shed new light on white women’s political behavior and qualify the existing gender gap literature in important ways, offering new insights into the ways whiteness, gender, and class intersect to shape political behavior. 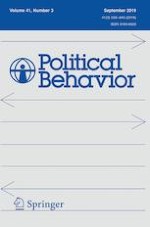 The Good, the Bad and the Ugly: Do Attractive Politicians Get a ‘Break’ When They are Involved in Scandals?

Gender Stereotypes and the Policy Priorities of Women in Congress

The Differential Effects of Actual and Perceived Polarization