Back to the search result list
​
print
Table of Contents
​
insite
Issue archive
​
archive
​
insite
Print
​
print
​
share
previous article Impact of Fencing on the Recovery of the Ground...
next article Agricultural Land Use Effects on Sediment Loadi...

Recovery of the benthic macroinvertebrate community in a small east Tennessee stream impacted by fly ash discharges from a power plant was investigated over a period of 6.5 years. The rate of recovery was greatest in the first 2 years after an initial 75% reduction in coal use led to a similar reduction in ash discharges and associated contaminants; further recovery followed after all fly ash discharges ceased. Recovery of the stream progressed through two phases. In the first phase, which lasted for approximately the first 2 years, most density and richness metrics increased considerably. In the second phase of recovery, the increases in metric values were followed by declines before fluctuating in and out of the lower reference ranges for the metrics. Detrended correspondence analyses and indicator species analyses showed that changes in species composition and community structure were ongoing throughout the second phase. Thus, the first phase was characterized by species additions, while the second phase involved species replacements and shifts in community dominants. Further recovery of the macroinvertebrate community will probably depend on additional flushing of fly ash deposits from the streambed and flood plain, because their continued presence reduces habitat quality in the stream and serves as a potential source of contaminants. Further recovery also may be limited by the availability of vagile species in nearby watersheds. 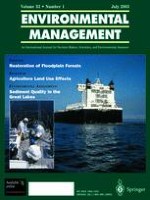 Modeling the Production and Uses of Biological Resources from the Viewpoint of Energy Flow in a Rural Village in Sichuan, China

An Evaluation of Vernal Pool Creation Projects in New England: Project Documentation from 1991–2000

Allocation of River Flows for Restoration of Floodplain Forest Ecosystems: A Review of Approaches and Their Applicability in Europe