Create an alert for Quality & Quantity now and receive an email for each new issue with an overview and direct links to all articles.

The literature on British Muslim women’s labour market experience suffers from four lacunae: the inadequate analysis of the multi-layered facets of their identities and the disadvantages they face; the narrow range of labour market outcomes studied (primarily labour market participation and unemployment); a lack of recent studies on the integration of Muslim women, educated in the UK and with English as their first language, into the labour market; and the absence of material on several sub-groups due to the lack of data, notably Arab, Christian Indian and White-British Muslim women. Using a large sample of data from the 2011 British census, the analyses presented here suggest that most non-White women face significant labour market penalties, with religion having a greater impact on labour market outcomes than race/ethnicity; Muslim women were the most disadvantaged, compared to other religious minorities, more so in relation to unemployment levels, part-time jobs and out of employment history, than in relation to occupational class and over-qualification. The results also suggest that the penalties facing Muslim women shaped by their ethnicity; not all Muslim women were similarly disadvantaged.
Advertisement
previous article New forms of citizen participation using SNS: an empirical approach
next article Effect of corporate social responsibility on corporate tax avoidance: evidence from a matching approach 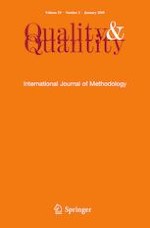 Drawing the optimal monetary poverty lines based on empirical data: an application to Spain

Teachers’ stereotypes about secondary school students: the case of Germany