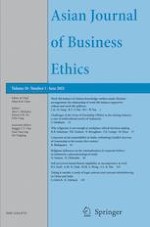 Taking it outside: A study of legal contexts and external whistleblowing in China and India

Challenges of the virtue of friendship (Philia) in the mining industry: a case of multicultural society of Indonesia

Why religiosity is not enough in workplace ethical decision-making