Revisiting the relationship between traffic congestion and the economy: a longitudinal examination of U.S. metropolitan areas | springerprofessional.de Skip to main content
SEARCH Menu 1 2 3 4

Create an alert for Transportation now and receive an email for each new issue with an overview and direct links to all articles. 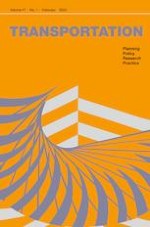 Existence, relatedness and growth needs as mediators between mode choice and travel satisfaction: evidence from Denmark

A new twist on the gig economy: conducting surveys on Amazon Mechanical Turk

An empirical study of consumers’ intention to use ride-sharing services: using an extended technology acceptance model