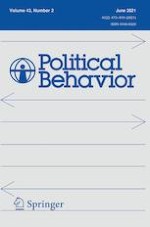 Motivating Participation Through Political Ads: Comparing the Effects of Physiology and Self-reported Emotion

Correction to: (Sex) Crime and Punishment in the #MeToo Era: How the Public Views Rape

Correction to: Gender, Race, and Intersectionality in Campaign Finance

Position Taking on the President’s Agenda

The Higher Power of Religiosity Over Personality on Political Ideology