In this paper, we consider risk-sensitive mean field games via the risk-sensitive maximum principle. The problem is analyzed through two sequential steps: (i) risk-sensitive optimal control for a fixed probability measure, and (ii) the associated fixed-point problem. For step (i), we use the risk-sensitive maximum principle to obtain the optimal solution, which is characterized in terms of the associated forward–backward stochastic differential equation (FBSDE). In step (ii), we solve for the probability law induced by the state process with the optimal control in step (i). In particular, we show the existence of the fixed point of the probability law of the state process determined by step (i) via Schauder’s fixed-point theorem. After analyzing steps (i) and (ii), we prove that the set of N optimal distributed controls obtained from steps (i) and (ii) constitutes an approximate Nash equilibrium or \(\epsilon \)-Nash equilibrium for the N player risk-sensitive game, where \(\epsilon \rightarrow 0\) as \(N \rightarrow \infty \) at the rate of \(O(\frac{1}{N^{1/(n+4)}})\). Finally, we discuss extensions to heterogeneous (non-symmetric) risk-sensitive mean field games.
Advertisement
previous article Generalized Cops and Robbers: A Multi-player Pursuit Game on Graphs
next article Evolutionary Stability of Polymorphic Profiles in Asymmetric Games 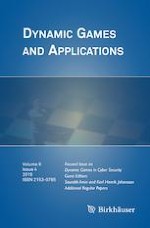 Preface to the Focused Issue on Dynamic Games in Cyber Security

Zero-Sum Stochastic Games over the Field of Real Algebraic Numbers