Nestos River flows through Bulgaria and Greece and discharges into the North Aegean Sea. Its total catchment area is around 6,200 km2, while the mean annual precipitation and runoff are 680 mm and 40 m3/s, respectively. The Hellenic part of the catchment has undergone a substantial hydroelectric development, since two dams associated with major hydropower pumped-storage facilities are in operation. The main objective of the paper is to assess the expected sediment delivery of Nestos R. at the uppermost Thisavros reservoir site. This has been carried out by implementing the Universal Soil Loss Equation in a GIS environment for determining the mean annual soil erosion in conjunction with a suspended sediment measurement program (114 measurements in total) accomplished between 1965 and 1983 adjacent to the dam site. The sediment discharge rating curve between sediment and river discharges in a power form has been constructed using five alternative techniques, namely (a) the linear regression of the log-transformed variables, (b) the same as (a) but with the Ferguson correction, (c) different ratings for the dry and wet seasons of the year, (d) the nonlinear regression, and (e) the broken line interpolation that utilizes different rating parameters for two discharge classes. It is shown that the mean annual sediment yield is almost equal for all rating curve formulations and varies between 178.5 t km−2 and 203.4 t km−2 and the highest value results from the broken line interpolation method. Accordingly, the sediment delivery ratios vary slightly between 17% and 19% of the upstream soil erosion. 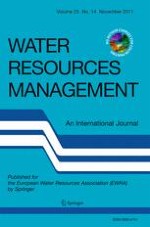