Self-employment and reason for migration: are those who migrate for asylum different from other migrants? | springerprofessional.de Skip to main content
SEARCH MENU 1 2 3 4

Are migrants more entrepreneurial than the native-born? Are they more likely to be self-employed? These questions have captivated the attention of academics and have become part of a flourishing area of research (Hart and Acs 2011; Jansen et al. 2003; Levie and Smallbone 2009; OECD 2010). There is evidence suggesting that foreign-born individuals tend to have higher propensity of entrepreneurship compared to the native-born (Kerr and Kerr 2017; Vandor and Franke 2016). In fact, recent evidence points to an increasing trend in self-employment rates and new business formation among the foreign-born in many countries, but a declining trend among the native-born (Fairlie and Lofstrom 2015).
Differences in entrepreneurship between migrants and native-born individuals may reflect labour market discrimination, differences in language skills, the existence of ethnic “enclave” economies, the self-selection process involved in migration, the temporariness of the migration experience and the likelihood of returning home and differences in risk aversion, among others. Discrimination in the labour market can increase returns to self-employment relative to waged employment (Clark and Drinkwater 2010; Fairlie and Meyer 1996). Ethnic enclaves provide access to markets for culture-specific goods and services, in which linguistic factors and culture-specific knowledge play a role (Miera 2008; Zhou 2004). More entrepreneurial individuals are more likely to migrate in the first place, and selective immigration policies geared towards attracting skilled migrants could be an augmenting factor (Borjas 1982). A higher likelihood of returning home might induce some migrants to enter self-employment in order to accumulate financial, human or social capital to be used once back to their home countries (Brück et al. 2018). Finally, differences in the degree of risk aversion between migrants and natives can lead to differences in the likelihood of engaging in entrepreneurial activities (Batista and Umblijs 2014; McMullen and Shepherd 2006; Ramoglou and Tsang 2016).
Advertisement
While the literature provides interesting insights on differences in entrepreneurship propensities between migrants and the native-born, it has largely ignored the heterogeneity of reasons for immigration among the foreign-born population.1 Reflecting on the case of the USA, Kerr and Kerr (2017) suggest that a key limitation of the evidence is that we “lack a clear picture of how the successful immigrant founders enter the United States, which can be for reasons as diverse as schooling, employment, family reunification, and more”. This statement would also hold true for most countries around the world; it highlights a key gap in the literature: reason for immigration may correlate with opportunities for waged employment and other factors that affect the choice of economic activity of individuals, including the legal constraints they face when making their choices. While some migrants move to a country to become entrepreneurs, most move for other reasons and engage in entrepreneurship after several years of residence in the host country (Kerr and Kerr 2017).
This study explores the relationship between initial reason for immigration and the propensity of self-employment among migrants. We ask: are those who initially migrated for asylum, family, study and work reasons as likely to engage in self-employment as the native-born? What is the potential role of immigration and related policies in creating these differences? Is the effect of mediating factors (e.g. networks, length of residence) on self-employment the same for all groups?
While self-employment on its own only captures one aspect of entrepreneurship, identifying how self-employment rates differ across those who migrated for different reasons is important in order to understand the consequences of immigration policy choices. For example, restricting or expanding one type of migration (e.g. student and work visas) can have a different impact on entrepreneurship and business formation than restricting or expanding other types (e.g. family visas, refugee resettlement). Exploring the role of reason for immigration can also inform the development of interventions directed at boosting entrepreneurial potential among the different migrant groups.
A number of studies have explored the role of ethnicity in self-employment patterns across subgroups of the population (Clark and Drinkwater 2000, 2010; Clark et al. 2017; Levie 2007), and others have looked at the role of the region of origin of the migrants (Andersson and Hammarstedt 2015; Blume et al. 2009; Hammarstedt 2004). Our analysis complements these studies and explores whether individuals from the same ethnic group and region of origin who migrated for different reasons have different propensities of engaging in self-employment.
Advertisement
Furthermore, we explore the mediating roles of length of residence in the host country and networks of compatriots in determining differences in self-employment rates across the various migrant groups we look at. If there is a strong degree of integration into the host society, those migrants who have spent longer time in the host country are likelier to converge in their self-employment rates to those of natives. However, we expect reason for immigration to influence the pace of migrant integration. Access to networks can increase the likelihood of self-employment but can also increase the likelihood of waged employment. Which of these two effects dominate could vary substantially across those with different reasons for immigration.
Our analysis is based on 2007–2018 data from the United Kingdom (UK), a country which hosts the fifth largest stock of migrants worldwide (World Bank 2018). The UK’s migrant population, estimated at 9.4 million or 14% of the population in 2017 (Office for National Statistics 2018), is diverse in terms of country of origin and reason for immigration. Adding the fact that the UK also has one of the largest economies in the world and that its immigration policy is likely to change in the near future because of Brexit (Vargas-Silva 2016b), it is an ideal case for exploration. While there is research on differences in the wages and hours worked of migrants in the UK by reason for immigration (e.g. Ruiz and Vargas-Silva 2018), issues related to self-employment and reason for immigration remain unexplored. Many high-income countries have immigration systems similar to that of the UK (OECD 2018). Our findings may therefore also inform debates elsewhere.

4.2 Length of residence in the UK

Figure 2 plots the combined estimated coefficients τ1 and τ2 as time in the UK increases. The zero line therein represents UK-born workers as the benchmark.
×
Two general points emerge from Fig. 2. First, we note that the recently arrived migrants have, on average, a lower likelihood of self-employment than the UK-born across all groups. Second, after 12 years in the country, all migrant groups have higher average levels of self-employment than the UK-born. The increase in self-employment rates over time can relate to many factors including changes in legal status (e.g. obtaining permanent settlement or UK citizenship).
Regarding H2, note that the line is initially steepest for asylum migrants and flattest for study migrants. In fact, for most of the period in the figure, asylum migrants are more likely to engage in self-employment than the other groups. The dynamics suggested by Fig. 2 do not coincide exactly with H2, as there is not a simple convergence pattern to the UK-born for any of the groups. However, there are clear differences in the adjustment in self-employment rates for the different migrant groups as length of residence in the UK increases.

Our analysis suggests that differences in reason for immigration are an important determinant of self-employment among the UK’s foreign-born workforce. The results suggest that expected differences in the reward to waged employment are likely to play a key role in this regard. Groups more likely to earn a higher reward in waged employment (i.e. study and economic migrants) are less likely to engage in self-employment, compared to those likely to be less rewarded (i.e. family and asylum migrants). The implications of compatriot networks and length of residence in the UK for the likelihood of self-employment also seem to be affected by reason for immigration. Overall, our results suggest that failing to account for reason for immigration can mask important factors related to the self-employment behaviour of migrants.
The results of the paper have implications for policymakers, the response of European countries to the “refugee crisis” and Brexit. The discussion below explores each of these areas.

The analysis suggests that route of entry into a country reflects a certain degree of common interests, social experiences, and legal restrictions that may affect the likelihood of engaging in self-employment in the short and long terms. Therefore, original reason for immigration should be a consideration in the creation of policies that aim to boost migrant entrepreneurship.

There has been a recent increase in the number of asylum applications in the EU because of the number of conflicts near Europe (i.e. the refugee crisis). Our results suggest that employed asylum migrants are substantially more likely to engage in self-employment than other migrants. Should these patterns also hold for refugees in other European countries (e.g. Germany), then the recent increase in asylum applications might result in an increase in the overall self-employment rate of migrants in Europe. A better understanding of self-employment dynamics of refugees would help in addressing issues of labour market integration for those obtaining asylum in EU countries.

The analysis suggests that migrants coming from EU countries have a higher propensity to engage in self-employment compared to migrants from non-EU countries. This is the case regardless of reason for immigration, which suggests that a post-Brexit system that makes it overall more difficult for EU nationals to migrate to the UK could reduce the self-employment rate of the UK’s foreign-born population in the future.

The data used come from the secured access version of the UK Labour Force Survey produced by the Office for National Statistics (ONS) and supplied by the UK Data Service (ONS 2018).

The views expressed are those of the authors and not necessarily those of the Nuffield Foundation. The use of the data in this work does not imply the endorsement of ONS or the Secure Data Service at the UK Data Archive in relation to the interpretation or analysis of the data.
Open Access This article is licensed under a Creative Commons Attribution 4.0 International License, which permits use, sharing, adaptation, distribution and reproduction in any medium or format, as long as you give appropriate credit to the original author(s) and the source, provide a link to the Creative Commons licence, and indicate if changes were made. The images or other third party material in this article are included in the article's Creative Commons licence, unless indicated otherwise in a credit line to the material. If material is not included in the article's Creative Commons licence and your intended use is not permitted by statutory regulation or exceeds the permitted use, you will need to obtain permission directly from the copyright holder. To view a copy of this licence, visit http://creativecommons.org/licenses/by/4.0/.

Title
Self-employment and reason for migration: are those who migrate for asylum different from other migrants?
Authors
Zovanga L. Kone
Isabel Ruiz
Carlos Vargas-Silva 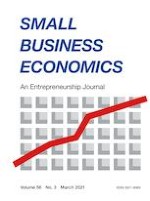 The occupational trajectories and outcomes of forced migrants in Sweden. Entrepreneurship, employment or persistent inactivity?

The buzz before business: a design science study of a sustainable entrepreneurial ecosystem