This paper presents modifications to the adoption of a Performance-Based Earthquake Engineering (PBEE) framework in Probabilistic Structural Fire Engineering. Potential Fire Severity Measures, which capture significant characteristics of fire scenarios, are investigated. A suitable Fire Severity Measure (FSM), which best relates fire hazard intensity with structural response, is identified by satisfying efficiency and sufficiency criteria as described by the PBEE framework. The study also implements a new analysis method called Fire Stripe Analysis (FSA) to obtain the relationship between FSM and the structural response. In order to obtain the annual rate of exceedance of damage and repair cost/time for an office building, an occurrence model and an attenuation model for office structure fires are generated for both Christchurch city and New Zealand. The process is demonstrated with the help of a case study performed for a steel–concrete composite beam. Structural response is recorded for the beam exposed to several fire profiles which are generated by varying fuel loads from 200 MJ/m2 to 1000 MJ/m2 and ventilation factors from 0.02 m1/2 to 0.08 m1/2. FSA and dispersion curves of structural response are plotted for every fire severity measure. Cumulative incident radiation is found to be the most efficient and sufficient FSM. The mean annual rate of exceedance of given levels of fire severity and structural response are evaluated for both New Zealand and Christchurch city. It is found that Christchurch city has a 15% less probability of exceedance of the given fire severity level in comparison to the whole of New Zealand. The extension of this work would facilitate designers/insurers to evaluate the probability of damage or failure of a structure due to a probable fire hazard. 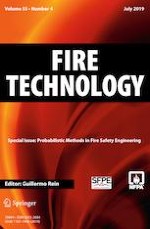