A growing body of work suggests that exposure to subtle racial cues prompts white voters to penalize black candidates, and that the effects of these cues may influence outcomes indirectly via perceptions of candidate ideology. We test hypotheses related to these ideas using two experiments based on national samples. In one experiment, we manipulated the race of a candidate (Barack Obama vs. John Edwards) accused of sexual impropriety. We found that while both candidates suffered from the accusation, the scandal led respondents to view Obama as more liberal than Edwards, especially among resentful and engaged whites. Second, overall evaluations of Obama declined more sharply than for Edwards. In the other experiment, we manipulated the explicitness of the scandal, and found that implicit cues were more damaging for Obama than explicit ones. 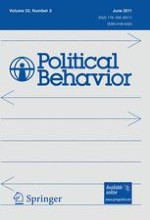 In the Eye of the Beholder? Motivated Reasoning in Disputed Elections

Accuracy and Bias in Perceptions of Political Knowledge

Distrust in Government Leaders, Demand for Leadership Change, and Preference for Popular Elections in Rural China

Polarization and Issue Consistency Over Time