Slogans (fixed or authoritative formulations, 提法) are ritually repeated elements in Chinese politics, appearing in strategic documents and main speeches. Building on new institutionalism in Political Science, this paper systematically introduces and conceptualizes the phenomenon of slogans. While slogans have been approached from the perspective of linguistics or (political or cultural) history and have often been dealt with partially or implicitly, the paper addresses a gap in studying slogans from the point of view of Political Science. I argue that they are an integral part of China’s political system, playing a role of a crucial organizational feature, whose significance goes far beyond a mere behavioural regularity, replicating a centuries-long Chinese tradition of officially orchestrated language to support a ruling regime. The paper specifically focuses on leadership (grand) slogans as the most comprehensive kind of slogans and their role in the post-Dengian period. Leadership slogans are relevant for and contribute to: 1) propaganda, 2) ideological innovations, 3) policy and strategic direction, 4) structuring politics, and 5) upholding a unity of the Communist Party of China. 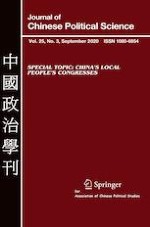 Daniel C. Mattingly. The Art of Political Control in China

Carl Minzner, The End of an Era: How China’s Authoritarian Revival is Undermining its Rise

Local Economic Development and the Performance of Municipal People’s Congress Deputies in China: an Explanation for Regional Variation