The adsorption and reaction of sulfur dioxide, SO2, was studied on oxidized and reduced CeOX(100) and compared to previous results on CeOX(111). SO2 adsorbs on oxidized CeO2(100) as sulfite, SO3 2−, at 200 K and sulfite is the only adsorbate observed on the surface at any temperature. The sulfite desorbs monotonically from 200 to 700 K. The adsorption and desorption of SO2 does not result in any change in the Ce4+ oxidation state. SO2 also adsorbs as sulfite on reduced CeO1.7(100) at 200 K. There is also a small amount of elemental sulfur, S0, formed. As the sample is heated the sulfite decomposes into sulfide, S2−. Roughly 25 % of the adsorbed S either desorbs or diffuses into the bulk of the reduced ceria. The decomposition, and resulting formation of S2− and O2−, re-oxidize some of the Ce3+ to Ce4+. Unlike what has been observed following the adsorption and reaction of many other molecules, the adsorption and reaction of SO2 is virtually identical on CeOX(100) and CeOX(111). 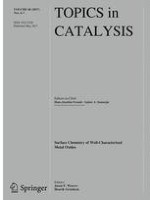 Simulated Temperature Programmed Desorption of Acetaldehyde on CeO2(111): Evidence for the Role of Oxygen Vacancy and Hydrogen Transfer