main-content
Top
Back to the search result list
​
print
Table of Contents
​
insite
Issue archive
​
archive
​
insite
Print
​
print
​
share
previous article Vulnerability and Resilience in a Socio-Spatial...
next article How do cities and regions adapt to socio-econom... 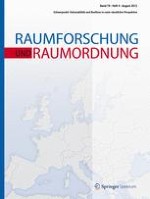 How do cities and regions adapt to socio-economic crisis? Towards an institutionalist approach to urban and regional resilience