Motion control software was implemented using the Microsoft\(^{\circledR }\) Kinect\(^{\circledR }\) (Microsoft Corp., USA) framework. The system was tested by 10 participants using a predefined set of six voice and six gesture commands under different lighting conditions to assess the influence of illumination on command recognition. The participants rated the convenience of the application and its possible use in everyday clinical routine. A basic set of voice or gesture commands required for interventional radiology were identified.

The majority (93 %) of commands were recognized successfully. Speech commands were less prone to errors than gesture commands. Unwanted side effects occurred (e.g., accidentally issuing a gesture command) in about 30 % of cases. Dimmed lighting conditions did not have a measurable effect on the recognition rate. Six out of 10 participants would consider using the application in everyday routine. The necessary voice/gesture commands for interventional radiology were identified and integrated into the control system.

Speech and motion control of image review provides a new man–machine interface for radiological image handling that is especially useful in sterile environments due to no-touch navigation. Command recognition rates were high and remained stable under different lighting conditions. However, the rate of accidental triggering due to unintended commands should be reduced. 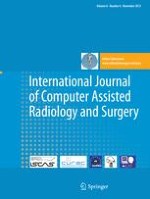