Focusing on the problem of CEO incentive and supervision, this paper constructs a three-party stochastic evolutionary game model of the CEO, compensation committee and audit committee, and analyzes the boundary conditions of the stability based on stochastic replicator dynamics equations. In addition, it carries out the numerical approximations with Taylor expansion and \(It{\hat{o}}\)-type stochastic differential equation, and further analyzes the influence of key variables on the direction and convergence rate of game players' strategy choice. The results show that: (1) The probability that the CEO takes self-interested behavior falls faster and the probability that audit committee adopts supervisory strategy rises faster when the self-interested behavior of the CEO gets larger. (2) The audit committee has a fast convergence rate, and arrives earlier in the neighborhood of the stochastically stable state where the incentive coefficient adopted by the compensation committee is larger. (3) The increase in supervision intensity increases the convergence rate of the CEO, but decreases the convergence rate of the compensation committee. (4) According to a comparative analysis of noise intensity, the influence of random interference on the decision-making of the audit committee is more volatile.
Advertisement
previous article A Mean Field Approach for Discounted Zero-Sum Games in a Class of Systems of Interacting Objects
next article Dynamic Equilibrium of Market Making with Price Competition 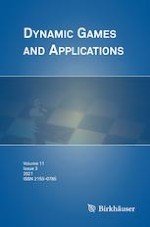 Strategic Connections in a Hierarchical Society: Wedge Between Observed and Fundamental Valuations