In this study, a refined finite element model of concrete-filled steel tubular column was established, and its dynamic response under impact axial load was explored. By extracting the axial stress changes of the steel tube and the core concrete at different positions of the member, the stress and strain characteristics of the concrete-filled steel tubular column under impact load were obtained for the respective impact loads. It is found that the steel tube and the core concrete basically met the deformation compatibility conditions in the same sections. The whole stress wave velocity of the concrete-filled steel tubular column was between elastic stress wave velocity values of the steel tube and the core concrete. Under the smaller impact load, the axial deformation of the column was close to elastic, whereas under larger impact loads, it underwent significant plastic deformation.
Advertisement
previous article Optimization of the Welding Properties of Friction Stir Weld Butt Joints Using the Response Surface Method Based on Taguchi’s Design
next article Study on Foreign Object Damage Law of Titanium Alloy Blade of an Aero-Engine Impacted by Sandstone 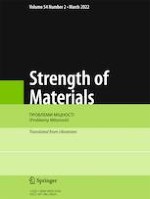 Efficiency of the Pendulum Damper with a Mobile Suspension Point