The investigated samples with dimensions of 73 mm × 23 mm (see Fig.  1) were manufactured by the plasma SYSTEM company with the application of DLD technology. The WC-NiFeCr samples contained 52% WC powder (mass fraction) and 48% NiFeCr powder (mass fraction). The size of the WC grains was equaled approximately to 40–100 µm. Symmetrical face milling and plane grinding tests were conducted on the samples. Both experiments were carried out with the application of coolants. A one-toothed CBN monolithic torus end mill was applied as a milling tool. Its geometry was as follows: diameter D = 8 mm; corner radius r ε = 200 μm; orthogonal rake angle γ o = −5°. The milling experiments were carried out on the rigid five-axis DECKEL MAHO model DMU 60monoBLOCK milling center.
×
The plane grinding of samples was conducted on FUM SPC 20B grinding machine with the application of fine-grained diamond and alumina cup wheels, with diameter D = 200 mm. The grit sizes of the applied grinding wheels were 106–125 μm in the case of diamond wheels and 250–300 μm in the case of alumina wheels. The experimental design is presented in Table  1.
Table 1
Design of experiments

The 2D surface roughness parameters were evaluated with the application of a portable stylus profiler Hommelwerke T500, equipped with T5E head and Turbo DATAWIN software. The measurements were carried out parallelly to the feed motion direction, including six repetitions for each investigated surface. The evaluation length for the milled surfaces was 4.8 mm, while in case of ground surfaces, l f = 15 mm. As a result of measurements, the following surface roughness parameters were determined: R a, R z , R pk, and R k.
In order to characterize the surface formation during precision machining of tungsten carbides, the Brammertz model was adapted. This approach considers the kinematic-geometric parameters, as well as the plastic-elastic deformations of the work material during cutting with very low uncut chip thicknesses ( h ≈  h min). According to Ref. [ 23], the theoretical height of the surface roughness during machining with a one-toothed tool is expressed by the following equation
$$R {}_{\text{tB}} = \frac{{{f}_{z}^{ 2} }}{{ 8{r}_{\upvarepsilon} }} + \frac{{{h}_{ \hbox{min} } }}{ 2}\left( { 1+ \frac{{{r}_{\upvarepsilon} {h}_{ \hbox{min} } }}{{{f}_{{z} }^{2} }}} \right).$$
(2)
In order to solve Eq. ( 2), the determination of minimum uncut chip thickness value h min is required. The h min (see Fig.  3) depends mainly on the cutting edge radius r n and mechanical properties of the work material (as hardness and flow stress).
×
Therefore, according to Ref. [ 29], the minimum uncut chip thickness value can be calculated from the expression
$$h_{ \hbox{min} } = kr_{\text{n}}.$$
(3)
According to Ref. [ 12], the value of k is equal to 0.428 during ultraprecision turning of tungsten carbide with CBN inserts.
In order to determine the cutting edge radius r n of the CBN end mill, measurements of the tool’s microgeometry with the application of the Alicona IF Edgemaster optical device were carried out. Analyses were conducted for the new tool (cutting time t s = 0), and for the worn tool (after cutting time t s = 9 min).
The application of Eq. ( 2) also enables the calculation of feed per tooth critical value f z_cr, corresponding to minimal surface roughness height. The f z_cr can be determined on the basis of the following expression [ 23]
$$ {f}\!_{{z}{\text{{\_}{cr}}}} = \sqrt { 2{h}_{ \hbox{min} } {r}_{\upvarepsilon} } . $$
(4)
From the investigation, the critical feed per tooth f z_cr was obtained as 22 μm/tooth. During the face milling carried out in conditions of an arc-shaped immersion of tool into the work material ( a p  \(\leqslant\) r ε), the maximal uncut chip thickness (for the selected cutting parameters) h max can be expressed by the equation
$${h}_{ \hbox{max} } = {r}_{\upvarepsilon} + {f}_{z} { \sin }\varphi - \sqrt {{r}_{\upvarepsilon}^{ 2} - {f}_{{z} }^{ 2} { \cos }^{ 2} \varphi } .$$
(5)
The φ angle corresponding to h max value (see Fig.  3) can be calculated from the expression developed on the basis of the trigonometric dependencies
$$\varphi = { \arctan }\left( {\frac{{\sqrt {{a}_{\text{p}} \left( { 2{r}_{\upvarepsilon} - {a}_{\text{p}} } \right)} - {f}_{z} }}{{{r}_{\upvarepsilon} - {a}_{\text{p}} }}} \right) .$$
(6)
The present calculations reveal that in the investigated range, the maximum uncut chip thicknesses were h max  \(\geqslant\) 2.1 μm.

This paper focused on a surface texture analysis during machining of direct laser deposited tungsten carbide. The experiment included precision milling of tungsten carbide samples with a monolithic CBN tool and grinding with diamond and alumina cup wheels. On the basis of this research, the following conclusions were formulated:
(i)
The surface texture formation during machining of direct laser deposited tungsten carbide is affected by the kinematic-geometric factors and elastic-plastic phenomena that occur during cutting with very low uncut chip thicknesses. In addition, the dislodgement mechanism of tungsten carbide grain fractions can be observed after CBN milling and grinding with a diamond wheel. The dislodgement mechanism is responsible for the appearance of micropits on the machined surface.
(ii)
The highest extent of micropits on the machined surface is found for milled samples with a feed per tooth value f z = 5 μm/tooth. In this case, the fracture ratio k f was over four-fold higher than that obtained after grinding with a diamond wheel. Furthermore, the samples ground with the application of alumina wheels were fracture-free ( k f = 0). This suggests that micropit formation can be influenced by the cutting edge radius (relatively grit size during grinding). However, this problem requires further studies.
(iii)
The lowest surface roughness parameter values ( R a, R z, R pk, R k) were obtained for the milled samples. The differences between R a and R z values were up to 208% for R a and 200% for R z in comparison to samples after grinding with a diamond wheel. However, in the case of samples ground with the alumina wheel, the discrepancies were approximately 84% for R a and 80% for R z . Additionally, the milled surfaces have better adherence and abrasion resistance than ground samples, which is confirmed by the lower R pk and R k values. 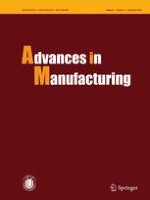 A brief overview on secure control of networked systems

Optimization of rollover stability for a three-wheeler vehicle