Self-assembled cellulose-pyrene nanoparticles were prepared from amphiphilic cellulose derivatives carrying a single pyrene group at the reducing-end, N-(1-pyrenebutyloyl)-β-cellulosylamine (CELL13Py and CELL30Py, the number average degrees of polymerization (DPn) of 13 and 30, respectively) and N-(15-(1-pyrenebutyloylamino)-pentadecanoyl)-β-cellulosylamine (CELL13C15Py and CELL30C15Py, DPn of 13 and 30, respectively). Transmission electron microscopy (TEM) observation revealed that CELL13C15Py and CELL30C15Py formed self-assembled nanoparticles with the average diameters of 108.8 and 40.0 nm, respectively. The average radius of CELL30C15Py nanoparticles (20.0 nm) agreed well with the molecular length of its cellulose chain (19.2 nm). CELL30C15Py nanoparticles were expected to have monolayered structure, consisting of cellulose shell with radial orientation and hydrophobic core of 15-(1-pyrenebutyloylamino)-pentadecanoyl groups. The fluorescent spectrum of CELL30C15Py nanoparticles showed an excimer emission due to dimerized pyrene groups, indicating that the pyrene groups at the reducing-end of cellulose are associating in the particles. The balance of hydrophilic and hydrophobic parts of the cellulose derivatives controlled their self-assembled nanostructures. X-ray diffraction measurements revealed that radially oriented cellulose chains of CELL30C15Py nanoparticles were mostly amorphous, and at the same time exhibited weak reflection pattern of cellulose II, which is believed to have anti-parallel orientation. 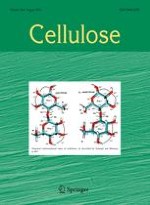 Hydroxyl orientations in cellobiose and other polyhydroxyl compounds: modeling versus experiment

Incorporation of carboxyl groups into xylan for improved absorbency