Are citizens willing to accept journalistic fact-checks of misleading claims from candidates they support and to update their attitudes about those candidates? Previous studies have reached conflicting conclusions about the effects of exposure to counter-attitudinal information. As fact-checking has become more prominent, it is therefore worth examining how respondents respond to fact-checks of politicians—a question with important implications for understanding the effects of this journalistic format on elections. We present results to two experiments conducted during the 2016 campaign that test the effects of exposure to realistic journalistic fact-checks of claims made by Donald Trump during his convention speech and a general election debate. These messages improved the accuracy of respondents’ factual beliefs, even among his supporters, but had no measurable effect on attitudes toward Trump. These results suggest that journalistic fact-checks can reduce misperceptions but often have minimal effects on candidate evaluations or vote choice.
Advertisement
previous article “An Inherited Money Dude from Queens County”: How Unseen Candidate Characteristics Affect Voter Perceptions
next article The Social Dimension of Political Values 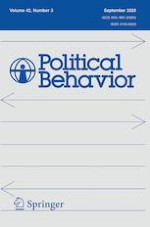