The Combined Effects of Destructive and Constructive Leadership on Thriving at Work and Behavioral Empowerment | springerprofessional.de Skip to main content
SEARCH Menu 1 2 3 4

This study investigates the within-domain exacerbation phenomenon in relation to employees’ perception of their supervisors’ leadership behaviors. This phenomenon proposes that exposure to supervisors relying on a combination of destructive leadership behaviors (DLB; operationalized as petty tyranny) and constructive leadership behaviors (CLB; operationalized as transformational leadership) should have more negative consequences on followers’ levels of thriving and behavioral empowerment than exposure to supervisors relying more exclusively on DLB or CLB. This phenomenon was tested using a person-centered mixture regression approach with a sample of 2104 Canadian employees from a police organization. Three profiles of employees were identified, representing those exposed to moderately transformational (mostly CLB), destructive (mostly DLB), and inconsistent (CLB and DLB) supervisors. Members of the inconsistent profile displayed the lowest levels of thriving and behavioral empowerment, followed by members of the destructive profile, and finally by members of the moderately transformational profile. Results also suggest that the inability to determine if a supervisor is more destructive or constructive might explain the within-domain exacerbation phenomenon. Indeed, in the inconsistent profile, leadership clarification seemed beneficial for employees. Increases in DLB resulted in a matching increase in empowered behaviors centered on the group and organization, while increases in CLB resulted in increases in thriving and empowered behaviors centered on individual performance.
Advertisement

previous article Managers are Less Burned-Out at the Top: the Roles of Sense of Power and Self-Efficacy at Different Hierarchy Levels
next article Can You Always Catch More Flies with Honey than with Vinegar? Applying an Asymmetric Approach to Transformational Leadership Research 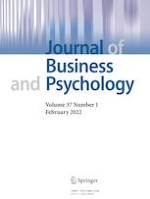 Managers are Less Burned-Out at the Top: the Roles of Sense of Power and Self-Efficacy at Different Hierarchy Levels

Can You Always Catch More Flies with Honey than with Vinegar? Applying an Asymmetric Approach to Transformational Leadership Research

An Approach–Avoidance Lens on Sexual Harassment: The Effects of Relative Attractiveness, Gender, Relationship Status, and Role