The effect of bicarbonate additive on corrosion resistance and microstructure characteristics of the zirconium-based conversion coating on carbon steel | springerprofessional.de Skip to main content
SEARCH MENU 1 2 3 4

Zirconium-based conversion coating (ZrCC) with modification has been studied for improving the corrosion resistance of carbon steel in this paper. Ammonium bicarbonate (NH4HCO3) and sodium bicarbonate (NaHCO3) were used as additives to investigate their roles on the conversion coating properties. The surface of the modified coating was characterized by scanning electron microscope, X-ray photoelectron spectroscopy, and electron probe micro-analyzer. In addition, the corrosion resistance was studied by Tafel polarization, electrochemical impedance spectroscopy, and the neutral salt spray test (NSST). The results indicated that both NH4HCO3 and NaHCO3 as additives could promote the precipitation of ZrO2, ZrF4, K2ZrF6, Fe2O3, and FeOOH on carbon steel and NaHCO3 as the additive could make the surface thicker and more uniform. According to the electrochemical and NSST results, NH4HCO3- and NaHCO3-modified zirconium-based conversion coating (ZrCC–NH4, ZrCC–Na) exhibited more effective corrosion protection property compared with ZrCC, among which ZrCC–Na sample showed the highest corrosion resistance.
Advertisement
previous article Assessment of lignin as a carbon source in intumescent coatings containing polyaniline
next article Corrosion study of graphene oxide coatings on AZ31B magnesium alloy 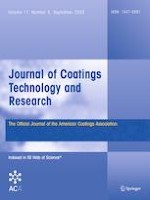 Physical properties and morphology of siloxane–polyacrylate dispersion and coating films